This section is for reloading and ammunition only, all loads found in here are used strictly at your own risk, if in doubt ask again.
All handloading data posted on Full-Bore UK from 23/2/2021 must reference the published pressure tested data it was sourced from, posts without such verification will be removed.
Any existing data without such a reference should treated as suspect and not used.

Forum rules
All handloading data posted on Full-Bore UK from 23/2/2021 must reference the published pressure tested data it was sourced from, posts without such verification will be removed.
Any existing data without such a reference should be treated as suspect and not used.

Use reloading information posted here at your own risk. This forum (http://www.full-bore.co.uk) is not responsible for any property damage or personal injury as a consequence of using reloading data posted here, the information is individual members findings and observations only. Always verify the load data and be absolutely sure your firearm can handle the load, especially older ones. If in doubt start low and work your way up.
Post Reply
11 posts
Message
Author

I've acquired some Hornady 303 150gn SP interlocks (to test the rumour that they are a bit fatter and have more bearing surface than PPU 174gn BT, and thus shoot better in some rifles).


I'm hoping to find an accurate load for target/competition shooting up to 600 yards (will take 1000 if that also works).


Vit themselves list a similar bullet - the Lapua 150gn Mega - and recommend a slightly faster powder N130 or N133. However, the only powder I have to hand in reasonable quantity is N140.

I just wanted ask if anyone has used N140 with these Hornadys and, if so, what sort of loads and results did you get?
Top 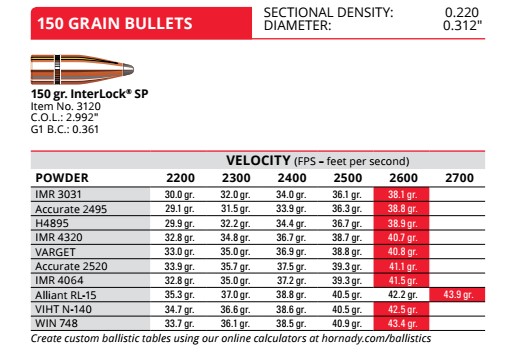 You know what? I've got so used to using the Vit reloading data, which usually doesn't list any of the bullets available here in UK - that it never occurred to me to look at the Hornady reloading data for their own bullet.

Only problem is that they seem to shoot low, and I guess that gets much worse at range. I'd like to get them close to the ballistic performance of regular 303 7z, so that i can use similar sight adjustments for ranges out to 600 yds.

I think I'll either use Vit's recommendation of the faster N133, or use someone's load from another forum where they used 43gn N140 for the same type of 150 gn SP.

Interesting about the PPU 170gn - I'll try some of those as well.
Top

All of Hornady data states that this bullet is .312 so I would be surprised if it isn't.
https://www.hornady.com/bullets/rifle/3 ... lock-sp#!/
Top

Do you know any one that has a copy of quick load if so ask them to run the numbers for you. I have ran the numbers you quoted out of curiosity. I wont put my findings on the forum but I am happy to pm you the results with the understanding that I can not guarantee you will get the same results in your firearm.
Top

You need to reference the pressure tested data source for these loads as per the forum rules.

Come on Bambi get some

Return to “Reloading and Ammunition”

Users browsing this forum: No registered users and 4 guests